The Anatomy of a Baby Boomer Renter

According to Pew Research , the first baby boomers reached retirement age in 2011 and about 10,000 more will reach the age of 65 every day until 2030. Since boomers make up 26% of the population, the effect of baby boomer retirement will continue to have a big impact on American society.

In addition to political and economic shifts, the rental and housing market have felt the ripple effects of aging boomers. Landlords are seeing an influx of older renters, as baby boomers transition from homeowners to renters. SmartMove’s State of the Rental Market resource shows the number of renters between ages 50 and 60 has increased by 4.3 million in the past decade, with a decline in homeownership rates.

With baby boomers renting more and having saved less for retirement than previous generations, it’s helpful for landlords to be in touch with what motivates baby boomers, their finances, and what the future holds for boomers in the rental market.

The Pew Research Center defines baby boomers as those born between 1946 and 1964. This is often broken down into younger boomers (ages 52 to 61) and older boomers (ages 62 to 70). When it comes to education, 31% of male and 30% of female boomers hold a college degree.

Prior to the boomers, the silent generation hit their stride in 1963. At this time, the U.S. Department of Housing and Urban Development reports that America was a nation of homeowners, with a homeownership rate between 61% and 65%. When most of the baby boomers reached adulthood in 1980, HUD data revealed that homeownership rates declined slowly but steadily until the early 1990s. Today, the National Association of Realtors reports that younger boomers make up only 16% of recent home buyers and older boomers comprise only 14%.

According to The Balance , baby boomers are goal-oriented hard workers who define themselves by their careers. Having grown up in an era of reform, they are confident, independent, and not afraid to challenge the system. Since they are work-centric, boomers are competitive in the workplace and may not be open to trends such as working remotely.

In 2010, a Pew Research survey concluded that boomers are the most likely to say they lost money on investments in the Great Recession and that their household finances have worsened since the recession started. Even since the recovery began, CareerBuilder states that boomers continue to face financial insecurity. Many are delaying retirement and holding onto their jobs for longer in order to recover lost savings. The Insured Retirement Institute found that boomers lack confidence in their savings; only 24% believe they will have enough to last throughout retirement. Looking back, these boomers say they would have saved more and started saving earlier. 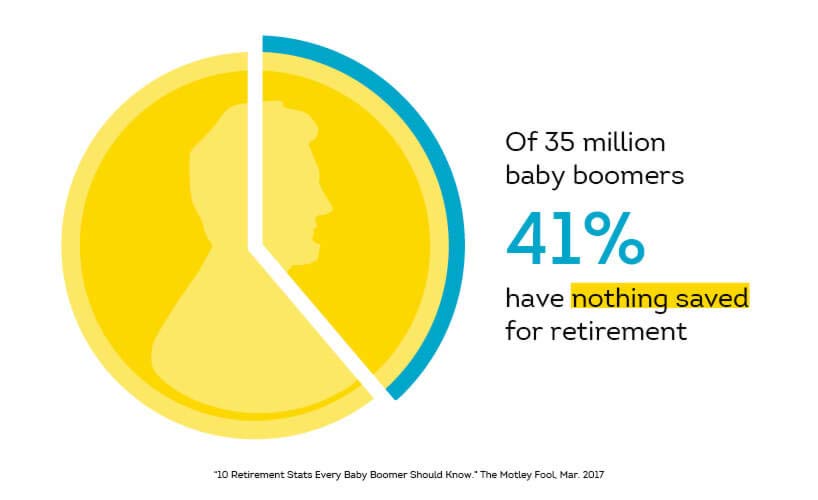 The same study discovered that 35 million boomers have absolutely nothing saved for retirement, and health care expenses may exhaust most of their Social Security benefits. The Motley Fool reports that out-of-pocket medical expenses will cost an average healthy couple $377,000 in retirement, before considering the cost of a nursing home.

The Consumer Financial Protection Bureau reports that 30% of homeowners aged 65 and older have mortgage debt. They list the median mortgage debt at $79,000. Compare this to the average social security benefit of $16,092 given by the IRI, paying off this debt would be a struggle for those who expect to live on social security checks.

On a positive note, a survey conducted by the Transamerica Center for Retirement Studies shows that 94% of retirees say they are generally happy, 90% are enjoying life and 84% have a strong sense of purpose. Despite financial challenges, boomers are adjusting their expectations and thinking creatively. For many, this means shifting from homeownership to renting. The Washington Post quotes Mark Hebner, president of Index Fund Advisors, as saying that retirees with the lowest fixed expenses have the least stress and most financial freedom.

What Boomers Want When Renting

According to a March 2017 study by Freddie Mac, baby boomers are finding more satisfaction in renting, compared to other generations. Freedom from maintenance and the inherent ability to easily change location are more favorable to baby boomers than gen xers and millennials. 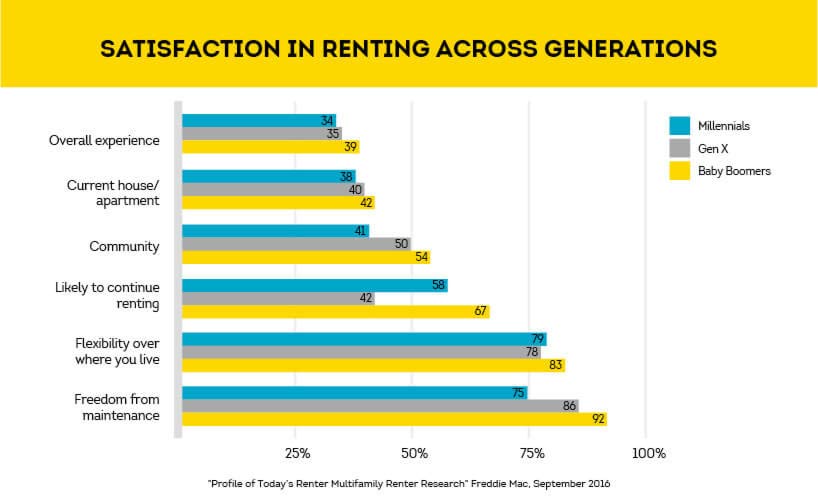 Baby boomers also reported greater satisfaction in their community and current rental property, whether it be their apartment or single family home. Compared to other generators, baby boomers are most likely to continue renting. Overall, baby boomers are satisfied with the rental experience for many reasons, but affordability and convenience top the list .

According to a 2016 Freddie Mac study, cost and convenience are the factors motivating baby boomers when deciding whether to move and where to live. When you consider the necessity for many boomers to creatively manage their retirement savings, it’s no surprise that affordability is listed as the top factor in making decisions on their next move.

Affordability is closely followed by factors that make life convenient for boomers: having the amenities to stay in one place during retirement and having maintenance taken care of for them. A Merrill Lynch Age Wave report shows that retirees prefer to age in their own home, and the number of people receiving care at home has increased as fewer go into nursing homes.

While you might assume that a warmer climate and proximity to family would be motivating factors, these are ranked of low importance to baby boomers when deciding where to move. This may be because younger generations are more mobile, so boomers would rather be content where they are than try to follow family all over the country.

The least important factor to the boomers surveyed was downsizing to a place smaller than their current home. As U.S. News points out, a smaller home doesn’t necessarily mean less maintenance and work. Since convenience is a top priority, factors like modern appliances and one-story housing are more attractive than a simple matter of square footage.

What does the future hold for baby boomers? Freddie Mac survey data shows that seven out of ten boomers currently renting would plan to move to another rental. Renters in the silent generation, older boomers and retirees prefer to rent more than younger boomers and those who are employed.

Additionally, the Joint Center for Housing Studies points out that homeowners that become renters may find transitioning back to homeownership difficult due to the need to juggle saving for a downpayment with saving for retirement. With these factors in mind, it looks like the rental market can continue to expect an older demographic. 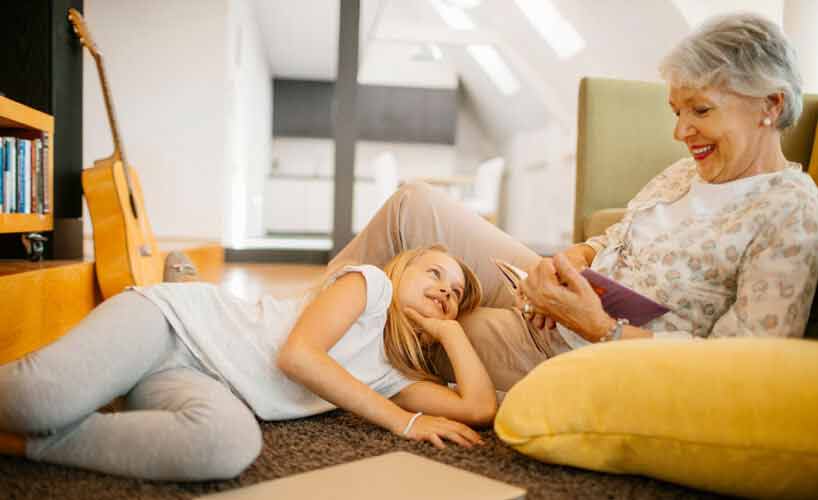 As the two largest generations shift towards renting, both millennials and baby boomers are influencing the rental market. The Real Worth Network reports that these demographic shifts are increasing rental demand and therefore rents.

According to the Huffington Post, if a large number of boomers put their homes on the market, investors could take advantage of a surplus market and price decreases to convert these homes into rentals. This could be a smart move for landlords, since most sources agree that there will be a high demand for rentals over the next five to ten years.

To help landlords understand the habits and preferences of this growing group of renters and know what to expect, we’ve created a guide that illustrates the anatomy of the baby boomer renter below.

For any potential renter, it’s important to follow a thorough tenant screening service process to determine whether or not they can afford the rent. With TransUnion SmartMove, landlords receive a tenant credit report formatted exclusively for rental screening, a criminal report drawing from hundreds of millions of national criminal records, a national eviction report, a ResidentScore and a custom leasing recommendation.